The technical complexity of software systems increases every year.

For example, what used to be a simple web app is now often a highly complex system working with hundreds of web services, mobile devices and more. At the same time, delivery cycles have decreased dramatically. It is a real challenge to keep up with today’s rates of change and it’s even more challenging to ensure that each release is consistent with the expectations of the customers.

A recent report by Sauce Labs, Inc., outlined five trends in testing that we should never forget.

There is no doubt that the adoption of the DevOps practices will continue.

These practices aim to reduce the time from development (Dev) to operation (Ops) while ensuring the quality of the software. According to Google Trends, in the past five years the interest towards DevOps has increased. One of the reason for that is the fact that DevOps practices emphasize on automation and integration and that more tools are introduced in the project.

Organizations, though, face many obstacles before being able to fully implement the right (for them) DevOps practices. Some of the main obstacles include the organizational complexity of the organization at the time the decision for DevOps is taken – people, departments, interdependencies.

Others are connected with the roles and responsibilities across the dev & ops that are not being aligned. Security and compliance concerns also hinder the adoption of the DevOps. We shouldn’t forget the lack of understanding of the phases of the dev lifecycle and who is responsible for the tasks. It is also very difficult to find a professional who can do anything and will be equally good at developing, debugging and deployment. 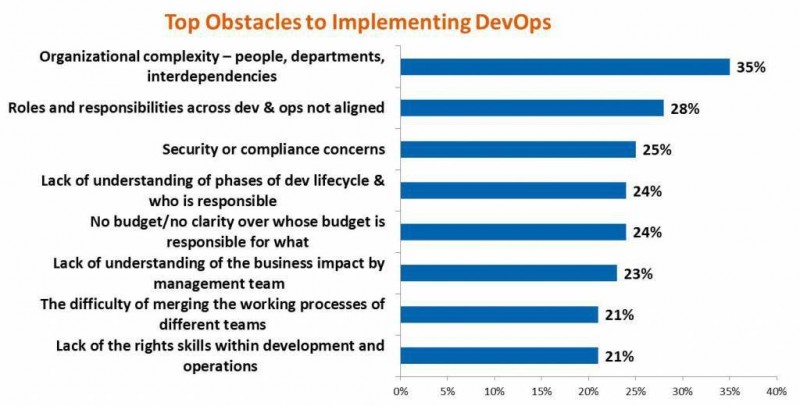 Nowadays, everybody speaks about automation. It is a trend that has taken over the testing world for a few years now, but reports show that only around 20% of the software testing activities have been automated. What is being automated is mainly the functional part of the UI and regression testing. Regarding the regression testing part, it is one of the best test suites to be automated. It’s usually a repetitive task that takes time and resources and at the same time is a bit boring and no test specialist is keen on performing it, even though regression is an important part of the testing process.

Test automation is seen as the main approach to shortening the delivery time and testing times. 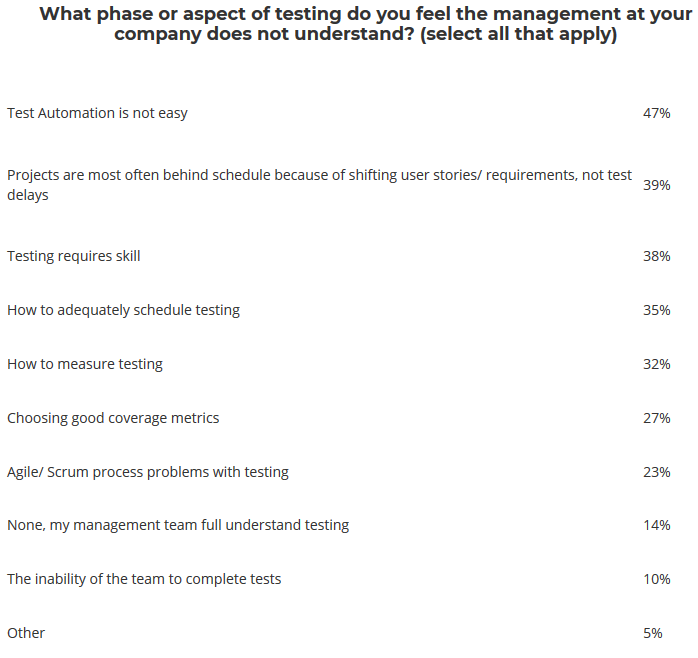 Test automation needs to be planned and designed well, scheduled and staffed correctly. Only 14% of the respondents replied that the management of the company understands that automation takes time. And never forget – automation testing requires skills. You cannot expect automation wonders from Junior QAs just starting their careers or from Senior Manual QAs without any investment. And, unfortunately, many companies do not understand the need of investing in employees, so that they can further professionally develop, and are quite reluctant to give them the time they need for proper automation. Of course, the turnover rate of the professionals, and the customers who are pressing for fast results, are part of the reasons why investments and time are not being given by the management. 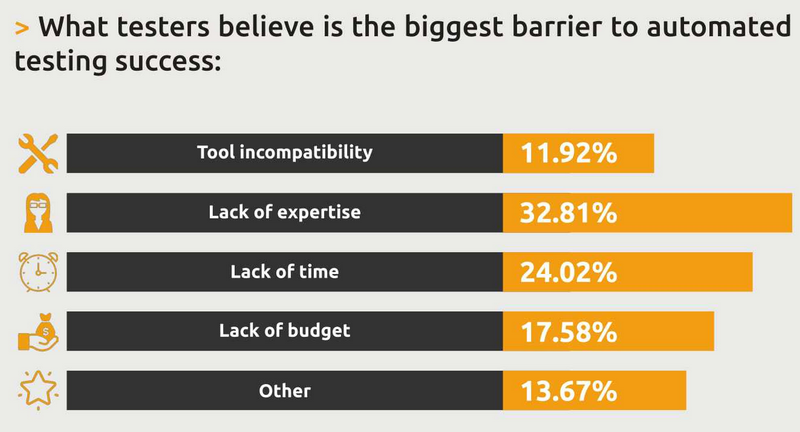 In our next part, we’ll take a look at the rise of some other recent trends – Artificial Intelligence and Machine Learning, and how they impact testing.